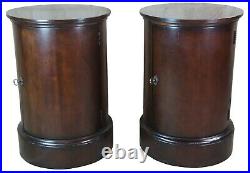 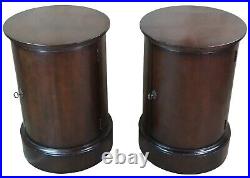 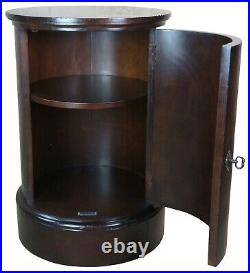 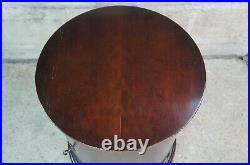 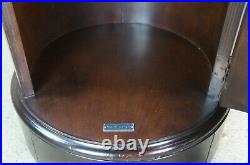 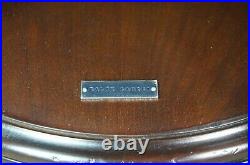 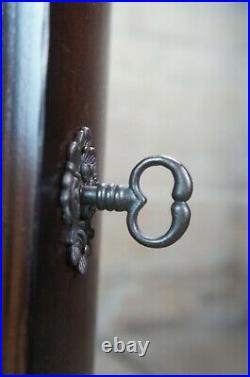 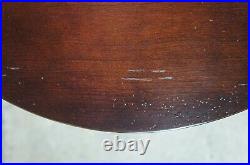 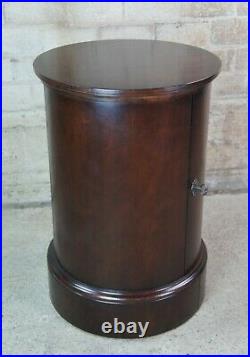 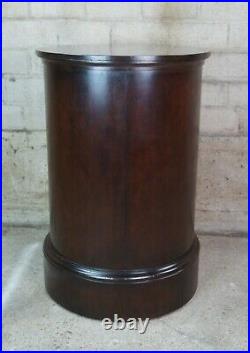 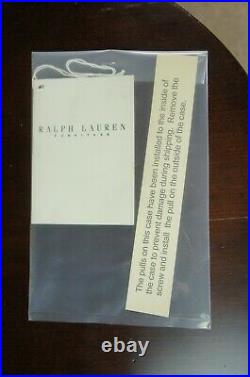 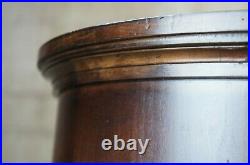 Two Ralph Lauren drum table or somno cabinets. Made of mahogany featuring round form with lower cabinet. Ralph Lauren was one of several design leaders raised in the Jewish community in the Bronx, along with Calvin Klein and Robert Denning. Lauren started The Ralph Lauren Corporation in 1967 with men’s ties. He persuaded the company’s president to let him start his own line. Drawing on his interests in sports, Lauren named his first full line of menswear Polo in 1968. He worked out of a single drawer from a showroom in the Empire State Building and made deliveries to stores himself. It was the first time that Bloomingdale’s had given a designer his own in-store shop. In 1971, Ralph Lauren Corporation launched a line of tailored shirts for women, which introduced the Polo player emblem, appearing on the shirt cuff. The first full women’s collection was launched the following year. 1972 marked the opening of Ralph Lauren’s store on Rodeo Drive in Beverly Hills, California, his first freestanding store. In 1972, Lauren released a short-sleeve cotton shirt in 24 colors. This design, emblazoned with the company’s famed logothat of a polo player, created by tennis pro René Lacostebecame the brands signature look. In 1977 Ralph Lauren Corporation introduced a signature cotton mesh polo shirt in various colours, featuring the polo player logo on the chest. In 1974, Ralph Lauren outfitted the male cast of The Great Gatsby in costumes chosen from his Polo line – a 1920s-style series of men’s suits and sweaters, except for the pink suit which Lauren designed especially for Robert Redfords Jay Gatsby. In 1977, Diane Keaton and Woody Allen wore Lauren’s clothes in the Oscar-winning film, Annie Hall. In 1978, the first Ralph Lauren fragrances, produced by Warner-Lauren, Ltd were launched at Bloomingdale’s. Lauren for women, and Polo the men’s cologne. This was the first time that a designer introduced two fragrances one for men and one for women simultaneously. The company entered the European market, and went international, in 1981 with the opening of the first freestanding store in New Bond Street in the West End of London, England. Lauren opened his first flagship in the Rhinelander mansion, on Madison Avenue and 72nd Street in New York City in 1986. The 98-seat restaurant, RL, opened in March 1999 in Chicago adjacent to its largest and world flagship Ralph Lauren store at the corner of Chicago and Michigan Avenues on the Magnificent Mile. It was followed by the opening of two additional restaurants Ralph’s at 173 Boulevard Saint Germain Paris store in 2010 and The Polo Bar at Polo’s store in New York in 2015. In 2007, Ralph Lauren Corporation acquired the NBC share of RL Media and the website was relaunched as ralphlauren. In September 2015, it was announced that Stefan Larsson would replace the company’s founder, Ralph Lauren, as CEO in November. Lauren stayed on as executive chairman and chief creative officer. In February 2017 it was announced that Larsson had agreed to leave his position as CEO effective May 1, 2017 due to differences with Lauren. On May 17, 2017, Ralph Lauren named Patrice Louvet President and Chief Executive Officer. Louvet most recently served as Group President, Global Beauty at Procter & Gamble (P&G). He took over on July 17, 2017. In October 2020, Ralph Lauren Corporation announced that it would transition its Chaps brand to a fully licensed business model to focus on its core brands, reduce its direct exposure to the North American department store channel, and setting up the Chaps brand to be nurtured with an experienced partner. Also in October, Ralph Lauren Corporation has appointed former Obama administration consultant Valerie Jarrett to the board of directors. In May 2021, Ralph Lauren Corporation announced it would sell its Club Monaco brand to private equity firm Regent LP. Very good, factory distressing. 20.5″d x 30″h. The sooner you pay, the sooner you get your item. Please let us know if you have any additional questions. We are sorry for the inconvenience. We do are very best to package and secure all our items so they make safe trips to their new homes. We strive to get your items delivered in the most safe and cost effective manner. Add a map to your own listings. The item “2 Ralph Lauren Round Mahogany Drum Side Tables Nightstands Bedside Cabinets” is in sale since Sunday, November 7, 2021. This item is in the category “Home & Garden\Furniture\Tables”. The seller is “designersconsignment” and is located in Dayton, Ohio. This item can be shipped to United States.